The earliest recorded attempts to find or generate pure water date back to 2000 B.C. Early Sanskrit writings outlined methods for purifying water. These methods ranged from boiling or placing hot metal instruments in water before drinking it to filtering that water through crude sand or charcoal filters (Baker & Taras, 1981). These writings suggest that the major motive in purifying water was to provide better tasting drinking water. It was assumed that good tasting water was also clean. People did not yet connect impure water with disease nor did they have the technology necessary to recognize tasteless yet harmful organisms and sentiments in water. Centuries later, Hippocrates, the famed father of medicine, began to conduct his own experiments in water purification. Hippocrates designed his own crude water filter to “purify” the water he used for his patients. Later known as the “Hippocratic sleeve”, this filter was a cloth bag through which water could be poured after being boiled. The cloth would trap any sentiments in the water that were causing bad taste or smell. 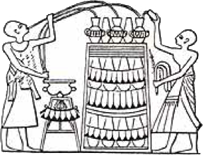 In the 1700's the first water filters for domestic application were applied. These were made of wool, sponge and charcoal. In 1804 the first actual municipal water treatment plant designed by Robert Thom, was built in Scotland. The water treatment was based on slow sand filtration, and horse and cart distributed the water. Some three years later, the first water pipes were installed. The suggestion was made that every person should have access to safe drinking water, but it would take somewhat longer before this was actually brought to practice in most countries!

These filters operate on the basic principle of using a media (membrane, screen, or other media) to physically screen out or trap particles based on their size. These filters are rated according to the pore size of the membrane, which is measured in microns, - the lower the number of microns (i.e. the smaller the pore size) the more effective the filter. For example, while a filter that removes particles down to 5 microns in size produces clean water, one that stops particles 0.5 microns in size, produces cleaner water. Two common medias used in particle filters are fibre and ceramic. Fibre filters are made out of cellulose, rayon, or another type of fibre. These filters have larger pores that prevent large particles such as dirt from crossing their tight fibre layer, but will allow dissolved contaminants such as lead and mercury to pass through. Ceramic filters, like fibre filters, trap asbestos fibres, some bacteria and parasites (though not enough to disinfect the water) and other particles in its small ceramic pores. They will not remove dissolved chemical contaminants such as sodium.

Within this category, there are three main types of filters. Depth Filters are matted fibers or materials compressed to form a matrix that retains particles by random adsorption or entrapment. Screen Filters are inherently uniform structures which, like a sieve, retain all particles larger than the precisely controlled pore size on their surface. Surface Filters are made from multiple layers of media. When fluid passes through the filter, particles larger than the spaces within the filter matrix are retained, accumulating primarily on the surface of the filter.

The distinction between filters is important because the three serve very different functions. Depth filters are usually used as prefilters because they are an economical way to remove 98% of suspended solids and protect elements downstream from fouling or clogging.

Surface filters remove 99.99% of suspended solids and may be used as either prefilters or clarifying filters. Microporous membrane (screen) filters are placed at the last possible point in a system to remove the last remaining traces of resin fragments, carbon fines, colloidal particles and microorganisms.

Activated carbon filtration is most effective in removing organic contaminants from water. Because organic chemicals are often responsible for taste, odour and colour problems, activated carbon filtration can generally be used to improve aesthetically objectionable water that is treated to attract certain contaminants. When water passes through this type of filter, the carbon particles attract and remove contaminants (including dissolved substances such as hydrogen sulphide, heavy metals such as lead, mercury and copper and chlorine). There are two types of activated carbon filters; granular and solid block. Granular activated carbon (GAC) filters use a cartridge packed with granules of activated carbon. When water passes through the filter, the filter's numerous carbon granules trap particles and remove substances dissolved in the water (such as chlorine, heavy metals and harmful organic compounds). Solid block Activated Carbon filters have activated carbon not in the form of small granules, but instead is composed of activated carbon particles that have been compressed into a dense material through which water travels. With very small pores and a larger surface area for the carbon to absorb particles, there is a better chance of trapping contaminants such as pesticides, chlorine, lead and asbestos than there is with other filters.

Note: While some filters contain bacteriostatic materials (which prevent the growth of bacteria), these filters can still eventually start trapping bacteria, allowing it to grow on the filter. For this reason, it is essential to flush the filter daily with cold, treated, potable water to remove any bacterial residue. Remember to follow the manufacturer's instructions and replace the filter as recommended.

Resin filters consist of a module that contains resins that can remove contaminants such as lead and other heavy metals, as well as minerals that cause deposits in kettles and coffee makers. These contaminants have an electrical charge and are removed by attaching to an opposite charge found on the resin. Resin filters can be combined with activated carbon filters to remove a wide range of particles and dissolved substances.