Hard water is water that has high dissolved mineral content (as opposed to soft water having a low dissolved mineral content). Hard water has high concentrations of calcium (Ca2+) and magnesium (Mg2+) ions. Hardness in water is defined as concentration of multivalent cations. Multivalent cations are cations (metal ions) with a charge greater than 1+, mainly 2+. These cations include Ca2+ and Mg2+. These ions enter a water supply by leaching from minerals (such as limestone) within an aquifer. Common calcium-containing minerals are calcite and gypsum. A common magnesium mineral is dolomite which also contains calcium. Rainwater and distilled water are soft, because they contain few ions. Hard water is typically found in ground water (wells) as the water is in direct contact with minerals which can be dissolved. Surface water (lakes, rivers or streams) is generally soft with very low levels of hardness.

Hard water is generally not harmful to one's health but can pose serious plumbing problems in both residential and commercial applications. From the lack of suds formation in bathing and laundry applications to the costly breakdowns in boilers, cooling towers and other equipment that handle water, water hardness is a serious issue.

Calcium and magnesium ions can be easily removed by the ion exchange process.

Water softening is a process that deals with a problem called "hard water." Hard water is any type of water that contains more minerals than average tap water. Mostly it has to do with elevated levels of calcium and magnesium, which can make it difficult for products like soap to dissolve in the water. It can also leave hard water stains on bathtubs or sinks and clog pipes.

Water softening is a process in which the ions of calcium, magnesium and sometimes iron are removed. It is these ions in hard water that make it difficult for products with other positively charged ions to dissolve in the water. By doing this, the water softening removes the offending minerals from the water. 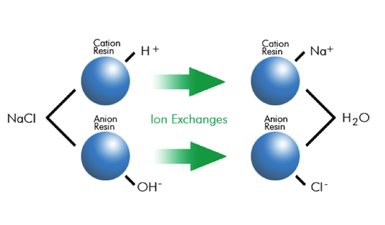 A water softener is a device that exchanges cations. What this essentially does is take the cations of calcium and magnesium (the two most common causes of hard water) and replace them with the cations of another substance. Most typically the ions are exchanged with ions from dissolved sodium chloride salt (brine).

Eliminating or reducing water hardness is done with a piece of equipment known as a water softener. It is inside this softener where the ion exchange process occurs. A softener is comprised of different components, each having their own unique purpose. The heart of the softener is the mineral tank which is a pressure vessel usually constructed out of fiberglass. These tanks are filled with negatively charged ion exchange resin. The brains of the softener lie in the control valve or softener head as it is commonly referred to. Most popular water softeners have an automatic regenerating system. The most basic type has an electric timer that flushes and recharges the system on a regular schedule. During recharging, soft water is not available. A second type of control uses a computer that watches how much water is used. When enough water has passed through the mineral tank to have depleted the beads of sodium, the computer triggers regeneration. These softeners often have reserve resin capacity, so that some soft water will be available during recharging. A third type of control uses a mechanical water meter to measure water usage and initiate recharging. The advantage of this system is that no electrical components are required and the mineral tank is only recharged when necessary.

When it is equipped with two mineral tanks, softened water is always available, even when the unit is recharging. 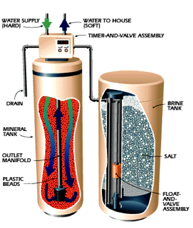 The third main component of a water softening system is the brine tank. The brine tank is basically a storage tank for sodium chloride (NaCl) or potassium chloride (KCL) which is mixed with water during the brine refill and regeneration cycles. This brine (a concentrated solution of salt water) is drawn back into the mineral tank during the regeneration phase to replenish the softener bed. The salt or potassium chloride is a sacrificial media and must be replenished on a regular basis to ensure adequate softening form the device.

The primary media contained within a water softener is known as ion exchange resin. This resin is basically an insoluble matrix typically in the shape of small (1-2 mm diameter) beads. The material has highly developed structure of pores on the surface of which are sites with easily trapped and released ions. This process of trapping of ions happens with a simultaneous releasing of other ions resulting in the term ion-exchange. Ion exchange resins can be manufactured to selectively prefer one, or perhaps several different types of ions. Typically, these resins are based on cross-linked polystyrene.

Water softeners have to primary functions; the Softening cycle and the Regeneration cycle. In the Softening cycle, water enters the softener and passes through the ion exchange resin charged with sodium (Na+) ions. As hard water passes through the resin, hardness ions (Ca2+ & Mg2+) are physically exchanged with the sodium ions on the ion exchange resin. This process continues until the resin becomes saturated with hardness ions and depleted of sodium ions. As the resin nears exhaustion, its ability to soften (exchange hardness ions with sodium ions) is limited. For the softener to function properly at this point-in-time, the Regeneration cycle must be initiated.

Hardness is measured by the level of calcium and magnesium bicarbonates in water and together represent Total Hardness (TH). Hardness can be quantified by instrumental analysis. The total water hardness, including both Ca2+ and Mg2+ ions, is reported in parts per million (ppm) or mass/volume (mg/L) of calcium carbonate (CaCO3) in the water. Although water hardness usually measures only the total concentrations of calcium and magnesium (the two most prevalent divalent metal ions), iron, aluminum, and manganese can also be present at elevated levels in some locations. The presence of iron characteristically confers a brownish (rust-like) colour to the calcification, instead of white (the color of most of the other compounds).

For the purpose of water treatment, hardness is measured in either grains per gallon (gpg) or parts per million (ppm). Grains per gallon is defined as one grain (64.8 mg) of calcium carbonate (CaCO3) dissolved in one US gallon (3.785 l) of water. Parts per million is defined as one milligram of calcium carbonate (CaCO3) per litre of water. To convert between gpg and ppm use the following factor; 1 gpg = 17.1 ppm. Additionally, milligrams per litre is equivalent to parts per million and can be used synonymously.